Was Trump taken over by "body eater"?

Over the past 40 years, I have seen time and again how politicians go through a complete change of mind when they take on a high office. The opinion they had before assuming office changes almost overnight to exactly the opposite and you do not recognize them again. Something happens to them that completely changes their minds after spending the first night as the new head of state. The next morning, they became somebody else. 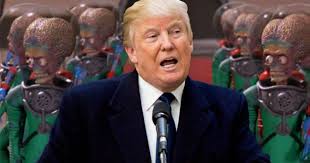 This complete change in personality keeps reminding me of the famous movie, "Invasion of the Body Snatchers," a film adaptation of Jack Finney's novel, "The Body Snatchers," an in 1956 black-and-white American science-fiction film by Don Siegel. Residents of a small American town go to bed as normal and when they wake up the next day, aliens take over their bodies.

Outwardly they look the same, but internally they have been replaced by cold, callous doppelgangers who help the aliens to take over and transform other humans. A local doctor tries to stop the alien invasion.

Exactly this callous cold can be observed in almost all politicians when they come to power. Before, they were against wars, after that they are for and command them.

Current example of such a complete change? It's Donald Trump.

The Trump after his inauguration is a very different than before. He is not recognizable again.

For example, Trump has sharply criticized Obama over his Syria policy when he was still an entrepreneur. He said 18 times that the US should NOT bomb Syria.

So he wrote in a tweet on June 16, 2013: "We should stay to hell out of Syria, the 'rebels' are just as bad as the current regime, WHAT DO WE GET FOR OUR LIVES AND THE $ BILLION NULL?"

Or his tweet of August 29, 2013: "What do we get for the bombing of Syria, except for more debt and a possible long-term conflict? Obama needs the approval of Congress."

On September 9, 2013, he wrote: "Do not Attack Syria - an attack that brings nothing but trouble for the US Focus on making our country strong and great again!"

Three days later: "The so-called 'moderate' Syrian rebels swear their alliance with ISIS after Obama's speech, we should not arm them!"

And one day later: "We should stop talking, from Syria and other countries that hate to stay away from us, build our own country and make it strong and great - USA!"

But what did Trump do as Obama's successor just two months after his inauguration? He has given the order to bomb Syria with 59 cruise missiles, as happened a year ago, and now again ordered an attack with 105 of these flying bombs.

In addition, he has deployed 2,000 US troops in Syria, established military bases in the north of Syria ... all WITHOUT Congressional approval !!!

He provides ISIS with weapons and protects them. So he does exactly the opposite of what he said before his election and what he criticized Obama for.

So the question is, what happened to Trump, that he turned his mind 180 degrees, and what happens to leaders after the inauguration?

Do "extraterrestrials" come to their bedroom and turn them into obedient zombies during the night, making them their tools, as in the movie above?

By extraterrestrials, of course, I mean representatives of the Deep State, the Military Industrial Complex, and the Zionist Lobby, who actually behave like cold, unfeeling, and alien beings, for they want to destroy our society and dominate and take over the planet, AS ALIENS !! !

But Trump has not only changed his whole opinion on the American policy of Syria, we still remember how he wanted a good relationship with Russia and wanted to dissolve NATO in Europe, because this alliance had long been no purpose, he said.

None of this has happened, on the contrary, NATO is being reinforced in Europe by more American soldiers and military equipment moving even closer to the Russian border.

Obama's imposition of economic sanctions on Russia has aggravated Trump.

There are even more provocations against Russia, with false accusations, and Trump has decided to expel 60 Russian diplomats and close the Consulate in Seattle.

Relations with Russia are at a low and China has started an economic war.

Who or what turned him over? Will national leaders, once in office, be threatened, coerced and blackmailed so that they change their minds completely and do exactly the opposite of what they have announced as a program in the election campaign?

Has Trump been threatened, will he face the same fate as President John F. Kennedy, being assassinated in broad daylight if he disobeys and does what Shadow Power commands him to do? Do you threaten your wife and children?

Something has to take place behind the scenes, so that the "body eaters" take control of a change of office and the American foreign policy of the predecessor is continued, namely, constantly increasing aggression and even more threats of war!

Trump once said that the WTC towers were blown up

He also completely changed his opinion on the events of September 11, 2001.

Did you know that Trump once believed that the Twin Towers of the World Trade Center could only have been destroyed by a targeted demolition?

YES, as a contractor who has built numerous skyscrapers and is therefore practically an expert in this field, he said in an interview that the buildings were "very strong structures" and stated that only powerful explosives could have pulverized them. He was of the opinion that we alone, only a fire can not have caused the complete collapse.

He knew the buildings very well because he had studied them closely and wanted to replace them with a new building.

In the following photo you can see Donald Trump, as he has presented his plans for a new building and replacement of the "old" twin towers: Trump wanted to build the TWIN TOWERS VERSION 2.0 and re-equiped with two new towers one floor higher than the existing ones, but his "rival" Silverstein came before him.

He probably got the message to believe the official version about the events and changed his mind, which speaks against any logic and physical laws.

Submit
$13.31
36 votes
3
Authors get paid when people like you upvote their post.If you enjoyed what you read here, create your account today and start earning FREE STEEM!
Sort Order:
[-]
skycornish (55)  ·  4 years ago

This post has received a 4.77 % upvote from @booster thanks to: @smokeit.

When molten aluminium came into contact with water it created multiple catastrophic explosions in the wtc towers which resulted in damaging the structure. There may have been devices planted to damage load carrying beams to guarantee maximum damage.
What has always bothered me is how Bin Laden who was closely connected to the Cia and the Bush family would go on to attack the Usa. Did the Usa betray him?
Did the Bushs' cheat his familiy in a business deal, what was it that caused him to do what he did.
Or is it more simple, that he was not acting as a enemy buth rather as a hired terrorist to give the neo cons what they wanted for a long time, a new Pearl Harbour event so the United States could unleash the full might of it's military forces under the idea of revenge and justice. Where as to do so without a wound would have been close to impossible and even if possible it would have been seen as neo colonialism, imperialism, hedgemony etc.
And when I say hired I don't necessarily mean hired by the Usa, it could have been Israel, Saudi Arabia, Britain or even a international conspiracy among many nations.
I do not see current events in Libya and Syria as separate from 911 and the Iraq war.