When you ask some superficial person what their favorite constellation is, they’ll probably say whatever zodiac sign they are. Or the big dipper, which is not a constellation.
For me, the answer is easy: Orion.
Orion, simply put, is the greatest spectacle alignment that has ever existed, the symmetry is that of an art piece, the colors are perfectly matched, and it houses the nebula that has had more influence in our wonder of the universe than any other. 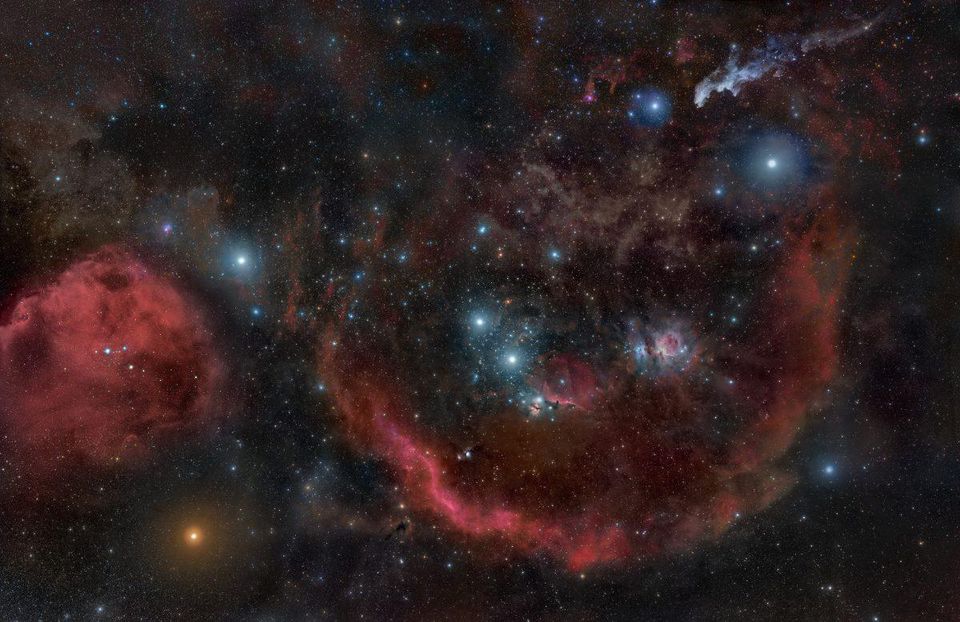 There’s quite a bit to take in there, but it truly is the whole picture, although one would normally observe the constellation turned 90 degrees clockwise from his picture. A very high exposure composite of all the details lying within this region of the sky.
On the bottom left, we can see the outlier star: Betelgeuse. Its Orange color is unmistakable, only a few other stars out there are both bright enough and red enough to be compared. Betelgeuse is a fascinating example of how stars can compensate for a lack of surface temperature with tremendous size. Betelgeuse is rather cool on its surface, around 3500 Degrees Kelvin. Giving it its deep red hue, but the diameter of this star is tremendous, 1.64 Billion Kilometers across, or just under 1200 times the diameter of the sun. If the sun were the size of a golf ball, Betelgeuse would be the size of the Space-ship earth in Epcot Disney-world. Because of this incomprehensible size, the star is the 9th brightest in the sky yet the second farthest out of the top ten brightest stars at around 640 Light-Years. It has around 8 solar masses, and it’s very close to exploding, at least in stellar terms. Perhaps give it another 100,000 years and it will light up the sky with a temporary explosion brighter than a full moon.
It was also the first star to have its surface directly imaged. Perhaps not the clearest image, but consider that this is equivalent to a photo of a basketball from 640 miles away.

Now shift your gaze over to the top right of the image and find the bright blue star called Rigel. The brightest in the whole constellation. This star has a beautiful contrast to Betelgeuse, appearing as a light blue with its 11,000 K surface. But make no mistake, the star isn’t just bright due to its temperature, as it’s certainly no shrimp. It stretches over 54 Million Kilometers across, about 78 Times the diameter of the sun. Certainly not a big as Betelgeuse, but believe it or not, it’s still brighter. Rigel is actually one of the most luminous stars you can see with the naked eye, its absolute magnitude measures at -7.7, about 70,000 times brighter than the sun. And from a distance of 860 Light-years, it manages to be brighter than Betelgeuse as the 7th brightest star in the sky. This is accomplished with a mass about 20 times that of the sun. 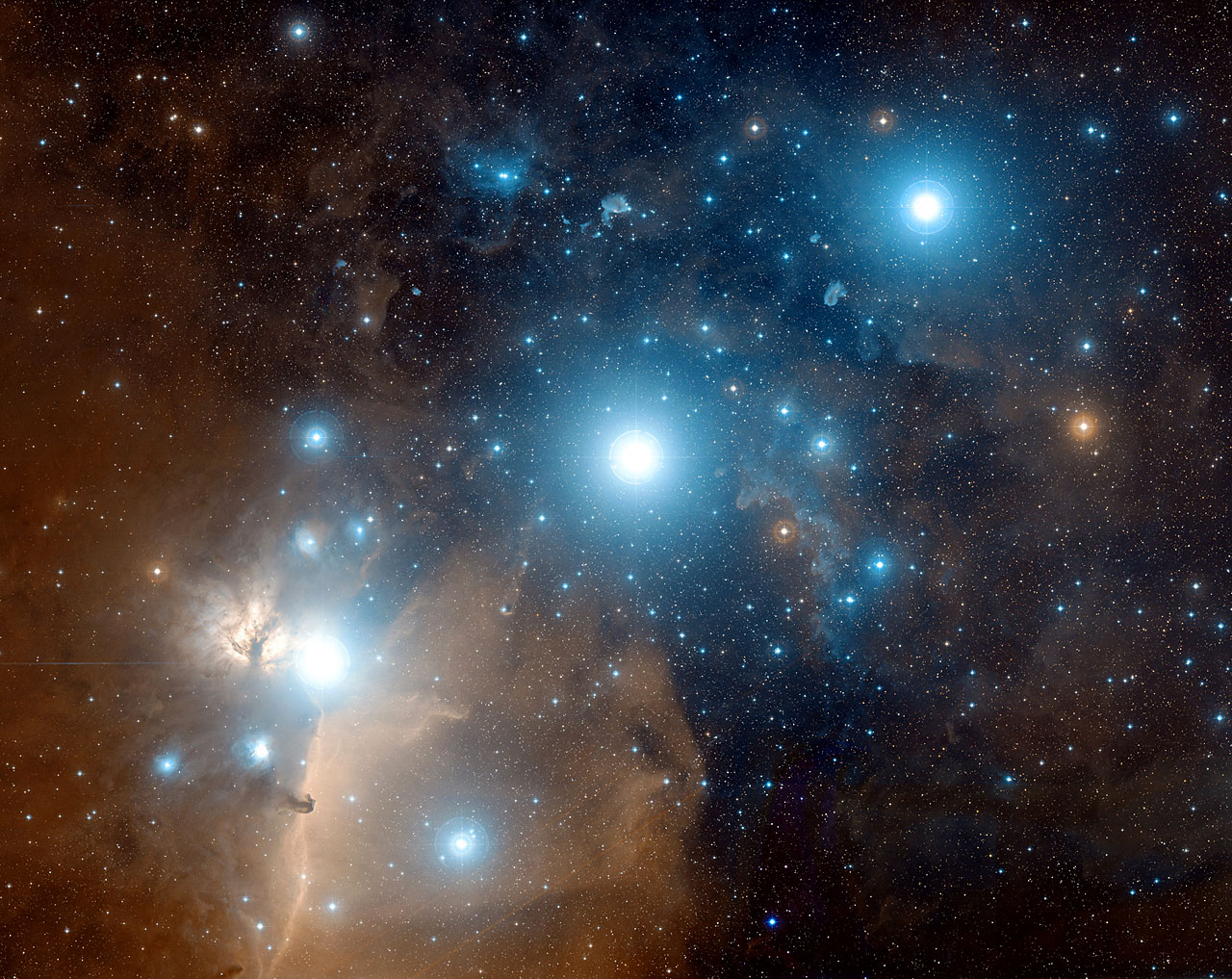 The above image shows a solid view of what you'll see in the center of the top photo, the famed alignment known as Orion’s Belt. Three stars all almost equal in brightness but all rather different from one another in reality. They have weird names, going top to bottom in this image their names would be Mintaka, Alnilam, and Alnitak. They all look the same in brightness, but the apparent luminosity is deceiving. Alnilam in the middle is the farthest, at 1300-1340 light years. But it’s also the brightest of the three, ranking as the 29th brightest star. Alnitak trails only slightly behind as the 31st brightest star. However it lies a bit closer at 1240-1260 light years. It look less bright in this image though as result of being in front of a bright nebulous background. Lastly Mintaka is the dimmest not quite reaching the top 50 but sitting at around 70th place. Although it is actually the closest of the belt at 820 light years. Interestingly enough though even Alnilam is not quite as luminous as Rigel, it is far hotter on the surface at around 27,500 K, but it is only 30 times the diameter of the sun, the smaller size makes it slightly less luminous although it will likely become brighter than Rigel in a few million years as it expands given its higher mass of nearly 40 Solar Masses.
Back near the top right there’s an odd glowing white cloud near Rigel. This is a faint structure of the reflective variety that is comprised mostly of interstellar dust. It is referred to as the witches head nebula for its wispy appearance. We don’t really know where it came from, some believe it could be a very ancient supernova remnant, but little is known about it. Aside from the fact that it is illuminated by Rigel.
Chances are you also took notice of the large red ribbon like structure flowing throughout. This, like the witches head Nebula, is completely invisible to the unaided eye. However the red hydrogen glow shows the mass of the Orion nebula complex, everything seen in this image that appears gaseous aside from the witch’s head is part of one big stellar nursery. Stars are born all throughout the region however there are two highlight areas where the gas becomes denser and more stellar activity is observed. First is located right behind Alnitak, the Flame nebula and Horse-head Nebula are both star factories located about 1300 light years away. 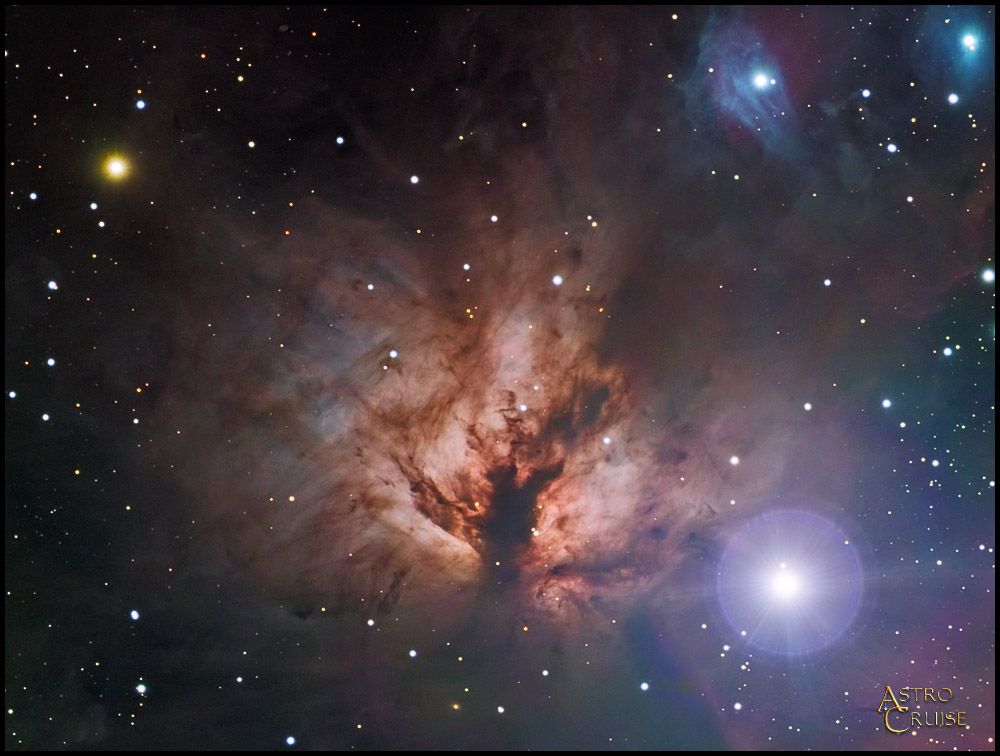 Flame Nebula
The horse head part of the horse head nebula is cool and thus has a dark hue. While the fire nebula is brighter and glows with the birth of new stars.

But far more extravagant is Orion's key feature, the one named after the constellation itself: The Orion Nebula.

As the closest stellar nursery to our solar system, we see the development and progression of Stars in astonishing detail. And the nebula itself comes in just as much detail. With an apparent diameter equal to the moon yet still hard to detect even with good skies, a telescope can reveal astonishing details of the gaseous structure and, if you have good color detection, a greenish coloration. Also holding the Theta Orionis Star cluster within its heart, just five stars produce most of the light in the nebula, in spite of thousands of stars being present. So when the next winter strolls in, be sure to turn your gaze to the South East to see the great hunter in all his glory.

science astronomy
4 years ago by astronomyizfun (56)

Submit
$1.87
10 votes
3
Authors get paid when people like you upvote their post.If you enjoyed what you read here, create your account today and start earning FREE STEEM!
Sort Order:
[-]
terrylovejoy (62)  ·  4 years ago

Hi @astronomyizfun Orion is one of my favourite constellations as well :)

Just a comment (putting my steemstem hat on for a moment). Just be careful of image attribution, and can the images actually be reused here. For example, the ALMA Betelgeuse image should look like this: 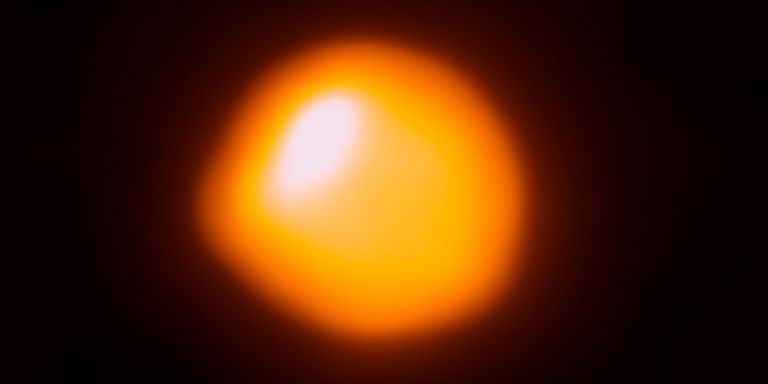 Thanks for the tip but may I ask how you found that link?

I used to place sources for images but found that every time the source would merely lead to another place where the image is sourced and so on. Never actually finding the original official location of the images first release.

Hi @astronomyizfun I generally look for who produced the image, in this case, the ESO European Southern Observatory and find the article/image on their website. They will also have guidelines for image credit/reuse. Note we are considered commercial because we are profiting from the work so in some instances you may not be able to use images. There is a bit of detective work required sometimes.

Just a bit a background, steemstem, are working hard to ensure that correct image attribution is given in articles to help 1. bring better credibility to the platform 2. prevent possible future legal action.