In exactly 23 days, the 21st edition of the Fifa World Cup will start in Russia.
Did you ever asked yourself the following questions:

Is this factor worth observing at all? Well one can argue that the higher the population, the bigger the pool of potential of talents. So the probability of picking of a “dream team” is higher. Do you agree?

Let’s do some observations:
Among the countries participating in World Cup, Brazil has the highest population.
And guessed what: Brazil won the title five times. That's more than any other country.

Germany which currently has a population of 82,293,457 won the World Cup 4 times. It is 7th most populated country among the qualified countries.
However Italy which also has 4 titles does not appear in the my statistics because they have not qualified for the world cup in Russia.

So you can already see that relying on the "population" criteria to make you make your picks is not a sure bet. China is the most populated country on earth but it has qualified only once for the world cup. That was back in 2002 when world cup was held in Korea in Japan. China hasn't made it through the group phase and unfortunately the team hasn't even score goal during the tournament (Source).
But guess who won the world cup in that year: Brazil.

Here are the countries ranked according to their population 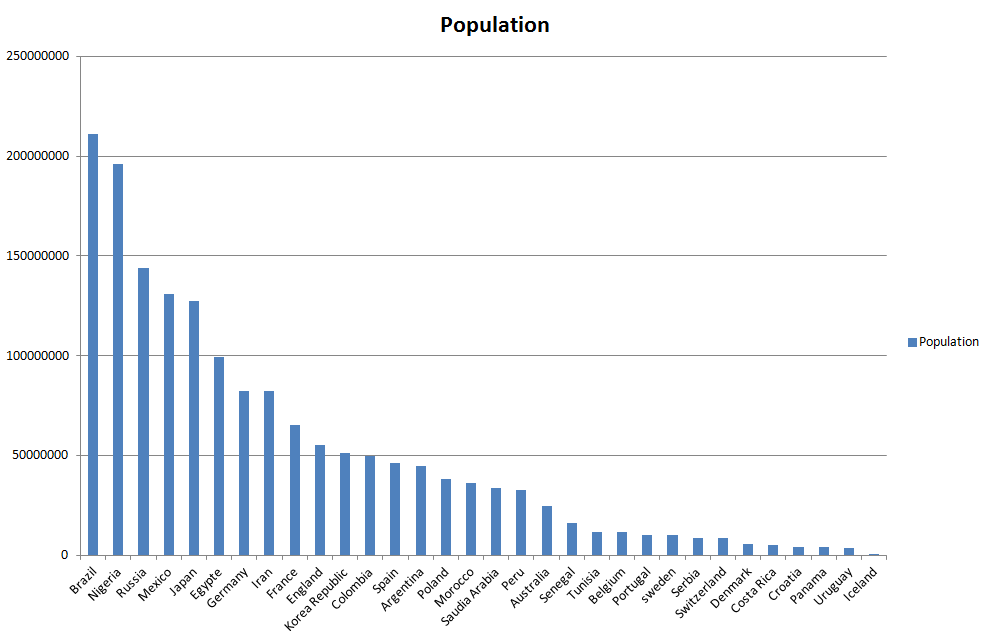 The source for these numbers is here and also Wikipedia

As you can see Iceland is the smallest nation during this World Cup. Are you ruling out that such a small country can make it through the group phase? Looking at their qualification path and especially after their sensational quarter finals performance at the Euro 2016 , I wouldn't bet on that!

Uruguay is the second smallest country in the ranking. Would you dare to bet against them? Interestingly Uruguay won the first World Cup which took place in 1930 and won the title for a second time in the 4th World Cup back in 1950 where they defeated Brazil in finals.

Despite being at the bottom of the population-ranking, I believe and hope Uruguay will go far in the tournament. That's the reason why Uruguay is on my list of 12 teams in the SBC World Cup Contest which is being organized by @fullcoverbetting. If you haven't read about it yet then check it out here

Submit
$3.24
18 votes
8
Authors get paid when people like you upvote their post.If you enjoyed what you read here, create your account today and start earning FREE STEEM!
Sort Order:
[-]
numpypython (67)  ·  5 years ago

Interesting analysis @sergino. I think temperature is going to be an interesting factor in the matches as well.

iirc, the temperature in Moscow and St. Petersburg has about a 5 degree difference.

For some countries that will definitely cause difficulties. But the top teams shouldn't have any difficulties with the climat.

Iceland is just amazing. Lets suppose that of the 337K habitants 50% are male. So that leaves a little bit less than 170K possible footballers for the National team. But most of them would be too old or just too young to play for the World Cup Team. 21,5K of those are registered as a football player!
So how crazy is that!

You're completely right! I haven't even considered that part of the statistics. So yes: that just incredible! I'm sure that they will gain even more supporters and there will be an overwhelming sympathy for Iceland after this World Cup.

Congratulations @sergino! You have completed some achievement on Steemit and have been rewarded with new badge(s) :

Award for the total payout received

Click on any badge to view your own Board of Honor on SteemitBoard.

If you no longer want to receive notifications, reply to this comment with the word STOP

Upvote this notification to help all Steemit users. Learn why here!

my hubby cant wait for this to start.